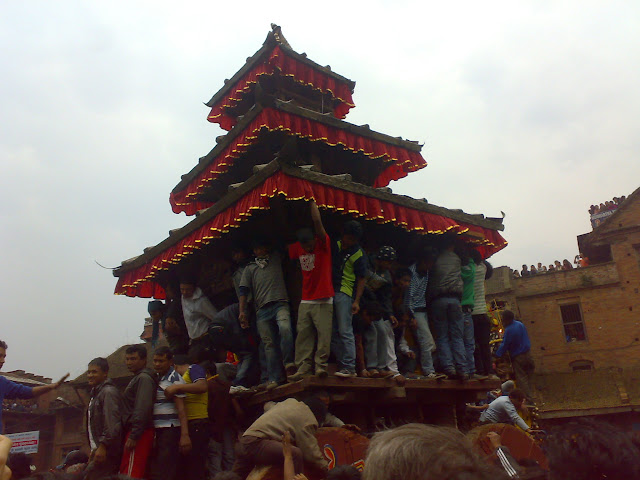 Bisket Jatra of this year 2067 has begin from today Bhaktapur.The main attraction of today is two storied Bhairav Nath Rath. Before the pulling of Rath began it is situated on behalf of Nyatapola Temple.Today the pulling between two parties , upper and lower began at around 4 pm.The beginning time of today is one hour earlier than previous year. The upper party is called “thane” and lower party is called “Kone”.According to old people the holy pagoda style portable temple it should be pulled towards upper party i.e towards suryamdhi(near Dattatraya temple). Today the power of lower party seems to be failure so the Rath was easily pulled towards Dattatraya. The Rath was stuck near by Ganesh Mandir of Golmadhi at around 6:30pm. Because of the power of people from Upper tole , the bhairav nath rath reached at Inacho at around 7 pm. After the struggle,at Around 9:30 pm the Rath reached at the premises of Dattaraya Temple. This is the final destination of the Rath for today. The Jatra will be continue after two day i.e. last day of this year 2067.I will post photos of that day. I could not post much photo of today because of loadsheding also I do not have SLR camera. Here I have embedded a sample video how the bhairav Nath Rath is pulled by people. http://www.youtube.com/watch?v=uQDQ56Z6mKo The videos is not uploaded by me .Video is not of today. It was uploaded by foreigner few years ago.But you have some concept on how Rath is pulled in Bhaktapur. From History it is known that in this today, generally there is conflict between two parties. Stones are fired from both side to initialze the fight between.Luckily today nothing happened.