Nepal Bandh in this year 2069 B.S. have been vigorous due to delay in making Sambhidhan. Though its been long year after the revolution took in 2062/2063 . Jestha 14 was fixed to lunch New Constitution after the revolution remarked. Time by time the government have extended for new constitution but failed due to political unstablity. This year 2069 is last year for lunching new consitution. But it seems that it is impossible . 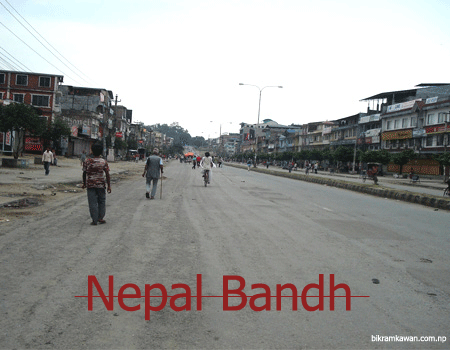 To give pressure to lunch Sambhidan ,different groups have been organizing parties.

This month Brahin,chettri made two days bandha on 28th and 29th Baisakh.

It seems that Jestha 1,2 and 3 is also scheduled for bandh. Don’t know who actually is organizing this bandha. Some people is telling that same Brahmin,chetri is organizing the bandh starting from today. While others are saying that New Mukti Morcha group. Still confirm information is yet to arrive.

Hope There will not Bandh in future.